DCTCP’s low and steady queue occupancy was verified and replicated using mininet. The results are plotted in comparison to TCP. DCTCP’s throughput characteristics are also analyzed and it obtains full throughput as long as the queue marking threshold K is set above a reasonable minimum threshold.

DCTCP is a new TCP based protocol that seeks to achieve low latency for foreground flows, high throughput for background flows and guarantees a queue occupancy that is an order of magnitude lower than that in traditional TCP. These issues are particularly relevant in data center networks. One of the major issues that DCTCP tries to address is the latency requirements of applications. DCTCP uses ECN to achieve the above goals but the key difference in DCTCP’s use of ECN is the way the sender responds to ECN echo bits. In the case of TCP, the senders response to congestion in a fixed manner. If they see a packet drop, they halve the window. In DCTCP, the ECN-enabled sender estimates the amount of congestion in the network, based on the fraction of marked packets over the last RTT. The sender’s congestion window is then updated based on this estimate. The beauty of this is that the sender will respond to congestion within 1 RTT after the queue occupancy becomes greater than K, the queue marking threshold. This ensures a small queue length at all times. This also means that the DCTCP is less aggressive than TCP when it comes to congestion window modification.

The paper includes extensive analysis and measurements. In addition to measuring the queue occupancy and throughput, they measure completion times for different kinds of traffic and  analyze impact of dynamic buffering. We were interested in replicating Figure 13 and Figure 14 from [1] (shown below for reference) because those graphs precisely compare the queue occupancy and throughput of DCTCP with TCP. These two metrics are relatively easier to measure and they are fundamentally more important than other metrics such as completion times. The main contribution of the paper is low queue occupancy and high utilization. These are exactly what we wanted to verify. Figure 13 plots the cdf of the queue occupancy for both DCTCP and TCP and Figure 14 plots DCTCP throughput vs marking threshold (K) for different values of K. As a first step, we wanted to validate our experimental setup. So we decided to replicate Figure 1 from [1] (again, shown below for reference) which the plots congestion window over some time interval. As an extra step, we wanted to verify the impact of N, the number of hosts on the throughput of DCTCP at the bottleneck link. So in this case, we basically plot Figure 14 but for different values of N. 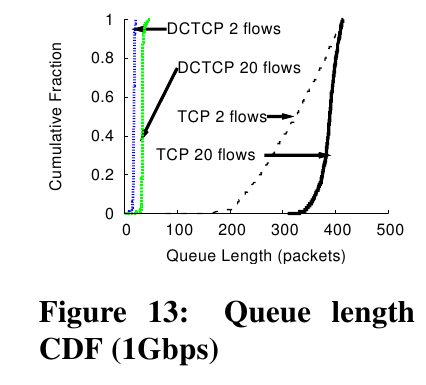 Our experiment is run on mininet using a DCTCP enabled kernel. The topology is a star topology with N hosts where N-1 of them are senders of long lived flows to the Nth host (receiver) through a bottleneck link. All the link rates are 100 Mbps in the experiment. Although the paper uses link speeds of 1 Gbps and 10 Gbps for a few experiments, mininet does not allow accurate measurements beyond 100 Mbps [2]. However, we are still able to qualitatively verify and compare DCTCP’s performance.

In order to replicate Figure 1, we created a topology with 2 senders sharing a bottleneck link to the 3rd host. The RTT between a sender and the receiver 1 ms, K = 20 packets, max queue size = 200 packets. The following replicated figure proves that the setup is working well with DCTCP maintaining a consistently low congestion window. We also observed that as we increased the RTT, keeping K fixed, the variation in queue size for DCTCP increases.

The figure below shows the variation of throughput for various K values for DCTCP. The topology is same as mentioned above except that the RTT is now 4 ms. The reason for a higher RTT is for showing a better variation in throughput as K changes. Having a very small K value may not yield interesting results. The prevent the bottleneck queue from underflowing, the value of K must be > RTT * C / 7 where C is the bottleneck bandwidth. As the paper has shown, the throughput increases with increasing values of K. This is because the packet’s ECN bit gets marked only when the instantaneous queue occupancy at the bottleneck link reaches K. Hence, when the packets have their ECN bits set, there is a reduction in the window size at the sender. Therefore, it is logical that an increase in K will lead to an increase in throughput, assuming we have not reached the maximum queue occupancy. We observe a similar pattern here too and this validates the graph shown in the paper. We choose the value for ‘burst’ to be 100 because this will result in successful EWMA (exponentially weighted moving average) calculation for all of the ‘K’ values in the graph. This is because RED settings require burst to be > K [5]. However, this places a higher weight on the moving average and hence will take a longer time to converge. We thus wait for the experiment to stabilize before we measure throughput.

Throughput vs K, for varying N:

The reason is that as the number of hosts sharing the same bottleneck link increase, even when the packets’ ECN bits are set, there are other flows sharing the link which can keep the link utilized. Consequently, we observe a significant increase in throughput as we increase the number of hosts. We see that when K reaches 20, all of the lines merge together, showing that for K >= 20,the effect of K on throughput is insignificant as each flow is capable of keeping the link utilized, which is shown in the replication of Figure 14. As mentioned in the paper, the actual value of K that is required for 100% throughput may be a little higher than the theoretical requirement owing to reasons such as TCP stack implementations, MTU settings and network adapter configuration. In addition, the EC-2 environment may cause other minor variations.

We have been able to qualitatively verify and compare DCTCP’s queue and throughput characteristics on mininet. The topology  involved is a simple star topology with N-1 senders sharing a single bottleneck link the Nth host. Since DCTCP has been replicated to a good extent, as in [2] and [3], we were careful enough to watch out for the nuances in setting up and running our experiment. The environment for the experiment is as important as the experiment itself. The accuracy of the results largely depends on timing issues. They should be measured only in steady state and with no other extraneous factors affecting the experiment. The EC-2 environment can be  unpredictable at times and we did encounter some strange behavior when plotting DCTCP throughput as a function of K, the queue marking threshold.

We have chosen Mininet as the platform for this assignment for a number of reasons. To name a few, an EC-2 instance with DCTCP enabled kernel already exists, earlier experiments on reproducing DCTCP results have used Mininet and explored the limitations and ease of reproduction. Finally, the graphs that we are interested in involve a simple topology and just monitoring of throughput and queue occupancy. These are familiar to us from the earlier assignments. That said, tuning RED parameters will greatly affect the reproducibility of the experiment. As alluded to earlier, one has to be very careful and fully understand the working and requirements of TCP RED because ECN is implemented as RED queueing discipline in linux. The calculations/settings from the paper were not directly transferable to the linux setting and it did require us to try out different possibilities.

As mentioned earlier, we did experience some strange and unpredictable behavior on EC-2. We noticed that this was the case when the EC-2 server is busy, which is usually before 6 PM. However, since our experiment did not require complex interactions among various parts, it was not hard for us identify when exactly we needed to wait long enough to reach steady state.

Some future work for DCTCP replication is to reproduce Figures 23 and 24 from [1] which measure flow completion times for different classes of traffic as they have not yet been done. This would be interesting because we can then verify if the completion times for mice flows are small and whether or not they are  affected by the few elephant flows in a data center.

Instructions to replicate the experiment:

NOTE : The shell scripts ask you for your email id, please provide them without any spaces and in the format xyz@zyx.com . This is for emailing the graphs back to you without the pain to copy them to your local machine etc. Furthermore, the script asks you whether you want to shutdown the instance automatically once the graphs are reproduced. Please provide a Boolean answer of 1 or 0 and we will shutdown the instance automatically once done. However, please note that any issues in between can lead to problems where we will not be able to send out the results via email and cannot shut down the instance, so please do verify that the instance is shut down. Hope it was easy to replicate the experiment.