Transmission Control Protocol (TCP) was not designed for today’s Internet, but it is almost exclusively used as a transport layer. There have been continuous efforts and innovation from industry and academy to achieve better performance. Most of the works target at specific behaviour/subsets of TCP algorithm – fast open, time stamp, packet pacing, window scaling etc.

The paper is motivated by a study of TCP retransmission patterns with live traffic data collected from Google’s web servers. The statistics demonstrate different retransmission patterns in the two selected Data Centers, where the dominating traffic patterns are Web applications (short response) and video streaming (long lived flows). Nevertheless, packet loss is inevitable and impacts the network throughput. PRR helps to alleviate the pain by reducing time spent in recovery and maintaining a large congestion window after recovery.

What the Authors Found

The paper investigates the efficiency of the algorithm in two ways. First, an experiment with a single flow shows the expected behaviour when responding to loss created with Googles’s open source network testing tool Packetdrill (https://code.google.com/p/packetdrill/). It demonstrates the detailed algorithm implementation, which has the following desired properties:

Second, the algorithm is explored at scale by implementing it in Google’s production network and relevant network statistics are collected. The data proves that PRR algorithm outperforms Linux TCP implementation and RFC3517 in the following two ways:

Our team is particularly interested in exploring the fundamentals and details of the proposed TCP algorithm – scheduling of retransmission, cwnd re-size, new packet transmission, etc – during recovery stage. Therefore, we have decided to work on reproducing the two plots in Fig.2 of the paper, which detail the TCP flow status of the Linux implementation (bottom) vs PRR (top).

The different behaviours of two TCP algorithms (Linux vs PRR) is tested and demonstrated with specific traffic pattern – a consecutive of four packets are dropped at the beginning of one full congestion window. Fast retransmission is triggered when duplicated ACKs are received. In addition, both algorithm support TCP option of selective acknowledgement (SACK).

The major difference observed from the plot is as follows:

We setup two virtual machines (VM) on separate Amazon EC2 instances, one with Ubuntu 11.10/Linux kernel 3.0 and the other running Ubuntu 12.04/Linux kernel 3.2. Starting from Linux Kernel 3.2, PRR is incorporated in the TCP implementation.

A simple Mininet topology is created: two hosts connected by a L2 switch via 100Mbps link. The Open vSwitch is controlled by a customized POX controller. The controller inspects incoming packets, and drops TCP packets to simulate packet loss.

Netcat is used to send file from one host to the other over a TCP connection. The TCP flow is recorded in pcap file with tcpdump listening on the sender’s Ethernet interface. We post-process the pcap file to generate the plot.

Detailed instructions on how to setup the testing environment and reproduce the results can be found in README section.

In this experiment, the switch drops the first five packets immediately after the TCP three-way handshake is established, while the initial congestion window size is ten(10) packets. The plots of TCP traffic given below result from four test runs – two linux TCP implementations – Kernel 3.0 without PRR vs Kernel 3.2 with PRR using both a smaller file (32KB) and larger file (64KB) 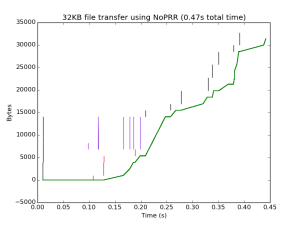 Two significant differences of the algorithm can be noticed:

What if the network is misbehaving…

In this experiment, we examine the TCP behaviour under heavy packet loss. In the first full cwnd with 10 packets, packet 1-4 and packet 6-8 are dropped. The plots are shown as below:

Under heavy loss, the superior performance of TCP with PRR can be clearly observed. Linux 3.0 without PRR does not transmit any new packet before lost packets are fully recovered. Even worse, cwnd is reduced to 1 due to the heavy loss. Linux 3.2 with PRR is able to advance its cwnd and send new packets after the first batch of dropped packets are retransmitted and acknowledged. cwnd size is close to half of the initial value immediately after recovery. As a result, the time spent to deliver a 32KB file under heavy loss is only half of that when no PRR is implemented.

Playing with the Experiment

In the final experiment, the switch waits after one full cwnd of packets are successfully transmitted and acknowledged. It then drops the first four packet at the beginning of the second cwnd of packets. Both small files and larger files are tested with two TCP algorithms. The plots are given as below:

It can be observed that retransmission of lost packet is more evenly spaced out in the case where Linux 3.2 with PRR is transmitting a 64KB file —- now the packet loss occurs at the beginning of a 20-packet cwnd. In addition, the cwnd advances to allow new packet transmission after all lost packets are retransmitted. As a result, the transmission time is significantly lower compared to TCP without PRR.

A Bit of Reflection…

In general, the experiments conclude that the two TCP algorithms (without and with PRR) demonstrate the same behaviour as that presented in the paper. However, there are some minor differences , which might arise out from the experiment setup.

The major difference is such that the authors generate test traffic using Packetdrill while we use netcat plus a lossy switch. Packetdrill is able to directly writie packet to raw socket and extract internal TCP flow status. It has more granular and accurate control over the timing of packet transmission/arrival. One example is that the SACK from receiver is evenly spread out so that the retransmission pattern can be clearly examined. While in our experiment, the ACK packets arrive in batches.

Secondly, we use two Linux Kernel 3.0 vs Kernel 3.2 to compare the TCP algorithms without and with PRR. However, it is not clear to us if there are other modifications/improvements in TCP implementation between these two versions. We have spotted two discrepencies. One is that in Kernel 3.0, cwnd is linearly increased instead of doubled even after successful transmission of one full cwnd of packets. The other is the Kernel 3.2 implements TCP Segmentation Offload (TSO) to push large packets (packet size exceeding MTU) at the end of cwnd. However, the two differences do not have a big impact on the experiment results.

Fun Along the Road…

We have encountered some complications during system and experiment setup. A quick discussion on the challenges and solutions/walk-arounds is here. We hope that this could be helpful for those who are interested in reproducing the results and exploring further.

Now, you can play with it!

A WORD BEFORE YOU JUMP INTO IT—

Since TCP is implemented in the Linux kernel, we needed two kernel implementations to generate our target plots. We chose kernels 3.0 and 3.2 for this purpose because they were readily available in Ubuntu releases. Modifying a kernel requires significant knowledge, especially considering the size of the TCP stack. For these reasons, we chose to run the experiment on two EC2 hosts, with one running a kernel prior to PRR implementation, and with one running the kernel just after PRR implementation. While there are other changes in the kernels, we were able to discern behavior that matches the expected impacts of enabling PRR.

Since PRR is implemented at the kernel level, any network simulator and any topology should be able to demonstrate its effects. We chose a very simple topology with Mininet since we have experience with these setups.

(Steps 1A and 1B are alternatives to each other)

STEP 1A (FOR A LIMITED TIME ONLY – AMIS COST TO HOST):

STEP 1B (FULL INSTALL FROM BASE UBUNTU):

One response to “CS244′ 15: Proportional Rate Reduction of TCP”