The increased popularity of cellular wireless network has opened up new opportunities to networking research, since cellular networks behave quite differently from the traditional wired infrastructures as well as wireless LANs.

One particularly important and challenging type of content to serve on the LTE networks is conversational video, which requires both low delay and high throughput. To this end, IETF and W3C have made efforts to standardize conversational media over web browsers, and new transport protocols such as Sprout [3] have been designed to improve video conferencing services over LTE networks.

Original Goals of the Paper

Wireless access such as LTE can experience a drastic change in channel bandwidth in a very short time frame. This means that an effective congestion control algorithm should be able to quickly adapt to rate changes and operate over a wide range of bandwidths.

The original paper describes SCReAM (Self-Clocked Rate Adaptation for Multimedia), a rate adaptive, delay-based congestion control algorithm devised mainly for conversational video services under LTE environment [1]. The goal of SCReAM is to provide low latency and packet loss, ability to compete with other traffic and stable bit rate. A C++ implementation is available on Github.

The authors first demonstrated the adjustable delay target, a feature from which SCReAM benefits when competing with other flows, e.g. typically TCP flows. They also ran SCReAM against a rate based congestion control algorithm GCC (Google Congestion Control) [2] under a dynamic LTE simulation. Experiments showed that SCReAM outperformed GCC because the former can better handle high load levels and react promptly enough to congestion to avoid delay spikes.

We are interested in reproducing Figure 3 from the original paper. We chose this figure because it not only demonstrates the advantage of making delay target adaptive in the algorithm, but also presents the performance, e.g. throughput and latency, when SCReAM is running alone. Specifically, in Figure 3, a competing FTP transfer starts at 16s and completes at 23s, sharing the same 1Mbps bottleneck link with SCReAM video flow. It can been that by raising the delay target, the SCReAM video flow can still get a share of the bottleneck bandwidth. 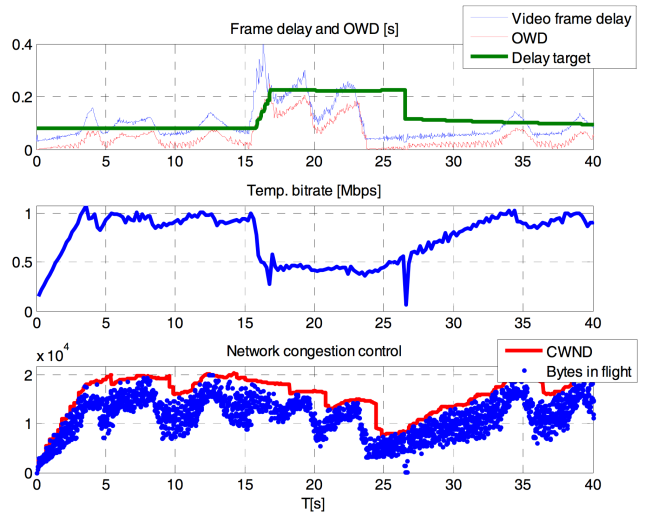 The original SCReAM’s implementation contains two components: one component includes the SCReAM server and client classes that provide API for any potential use, and the other one includes their experimental code along with a few support classes.

However, it is notable that their experiment is a pure simulation. We decided to make the following modifications to their source code to make it more “real” and convincing. 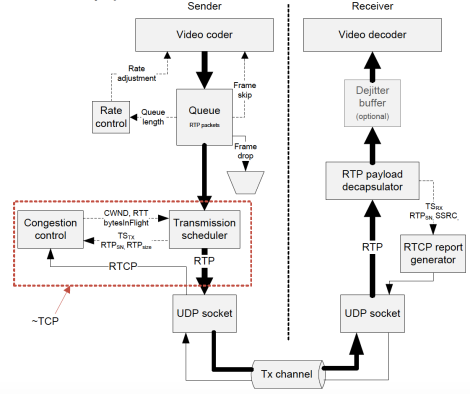 We were able to partially reproduce the results from Figure 3. First of all, we adopted all the default parameters in their server and client API and conducted the experiment. Specifically, we ran a pair of SCReAM server and client first, and then ran a pair of iperf TCP server and client as the competing flow from 15s to 18s, which actually turned out to be most consistent with the original Figure 3. They all share the same 1Mbps bottleneck link, which is created by Mahimahi [4]. We generated Figure 3 as below using the log printed by program.

It can be seen that the delay target is not adjusted at all as the paper claims. We explored the reasons by diving into SCReAM API, and finally we found two parameters, the variance and skewness of OWD (one way delay), in API are not general enough to work in different environments or handle different types of competing flows. We noticed that the two parameters are assigned with constant values in the source code, so that they are only working in their specific simulated environment but not in our real experiment.

Therefore, we had to modify the two parameters so that the delay target can be adaptive as they claimed. We ran the experiment again, and got Figure 4 which is closer to their results.

Note that our SCReAM flow matches the performance in the original paper’s experiment before the TCP flow starts (0-15s), but experiences much higher delay and smaller throughput with the presence of a competing flow. This is because although in our experiment the congestion window size (CWND) increases with the increase of delay target, the increase is still not enough for the SCReAM flow to be able to compete with the TCP flow.

Since we have already seen that the constant parameters do have important effects on the performance, we speculate the difference is still partially caused by them, or broadly speaking, by their method to determine if there is any competing flow and how to adjust congestion window based on that. Another possible reason is that the target bitrate of SCReAM is only about 1Mbps, which limits the throughput performance. We provide more discussion in the Critique section.

The main challenged for reproduction was due to the readability of SCReAM’s source code. Unfortunately the source code is not very documented, which ended up causing us a lot of debugging time. For example, for a while our SCReAM flow was stuck at a low throughput; we later found out that it was because our parameter setting on feedback interval ended up limiting the target bitrate, the logic behind which was totally not obvious.

There are two options for reproducing the results:

3. Get the experiment code and build from source

To generate the results, you would need to open two terminals. Start the SCReAM and iperf servers in the first terminal:

In the second terminal, start the SCReAM and iperf clients:

The scripts will start an iperf TCP server and SCReAM server simultaneously, and then start a SCReAM client in another shell. After 15 seconds, an iperf TCP client will start as the competing flow, sharing the same 1Mbps bottleneck link with SCReAM flow. 40 seconds later, the SCReAM program will print log to scream.log.

You can then generate the plot by running:

To see the performance of a single SCReAM flow, in one shell run

In another shell run

When the server and client are done, generate the results by running

which will make Mahimahi output the delay and throughput graph. You can also run

to generate the three figures from SCReAM’s log file scream.log. This is a good way to check that SCReAM’s log is consistent with Mahimahi’s results.

One could argue that 1Mbps is a reasonable target given the current state of LTE network. The author also hinted at the number in the experiment set up of Figure 3 – the shared bottleneck link has capacity of 1Mbps. However, he could have been more explicit about the assumptions.

One response to “CS244 ’16: Self-clocked Rate adaption for Conversational Video in LTE”